Hasbro has a page where you can order a Cloverfield action figure. There’s no image up, but this is a 14″ tall limited edition figure of the monster with 70 points of articulation and a number of accessories. Retail price is $99, but this thing isn’t shipping until September 30.

An unnamed, former Mego employee is the source of this amazing collection of Mego toys and mockups that were part of the company’s presentation at Toy Fair 1974. All of the awesome Mego goodness is going up for auction on eBay this month. I’d love to have these Superfoes Megos, but this is probably going to be way out of my price range. 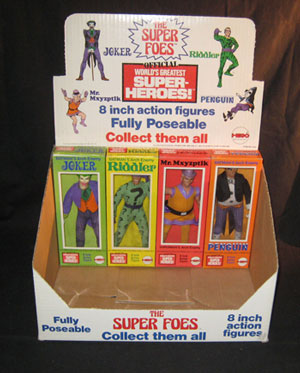 Fight-Dice is an “original tabletop combat system allows you to take any Action Figures and fight pitched duels with them, using nothing but a handful of dice.”

Since then the line has been seriously revamped, with Mattel dropping the game component entirely, and rebranding these 3″ figures as DC Universe Fighting Figures. The sculpts still look very nice, and I’m sure for those concerned about the gaming aspect that there will be plenty of net rules for integrating these with AttacktixÂ  figures.

Marvel has its Spider-Man and Friends line of toys for toddlers, and Mattel is soon going to be bringing out a DC Superfriends line aimed at the same market. There are definitely adults who collect these, but I find most of them annoying (my dog, however, loves the ones my son leaves on the floor).

I make an exception for the DC Superfriends Batmobile, 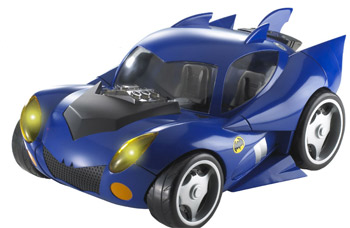 Action-Figure.Com reports on Mezco’s upcoming line action figures based on The Goonies, including a 12″ Sloth.

Awesome — even more amazing than that time that Chunk saved those old people from that nursing home fire, right?