Over at Boing! Boing! gadgets guru John Browlee profiles some awesome looking Lazer Tag guns, but slips in a pretty big factual error in the process,

I’m really tempted to pull the trigger on these. I’ve never played LazerTag: I’m an 80s child whose parents unfortunately bought into the whole nightly news scare when the first urban legend about a cop shooting a kid armed with a LazerTag gun in a playground made its word-of-mouth lamentable tour.

Except the “cop shot kid because he thought LazerTag gun was real” urban legend isn’t an urban legend. It in fact did happen.

Groups opposed to war toys today condemned the laser gun game a teen-ager was playing when he was shot to death by a sheriff’s deputy.

Toy manufacturers must share the blame for the death of Leonard Joseph Falcon, of Rancho Cucamonga, Calif., said Dr. Carole Lieberman, assistant linical professor of psychiatry at the University of California at Los Angeles.

The 19-year-old was playing the Lazer Tag game when he was shot to death Tuesday night at Central Elementary School in Rancho Cucamonga by a deputy who was told armed prowlers were loose in the schoolyard.

The Associated Press also had a more detailed account of the Falcon shooting which is also on the New York Times website.

Before the whining activist complainers had their way, toy guns sold in the United States tended to look very much like real guns. I remember having an Uzi water pistol as a kid that aside from being plastic and only about 3/4 scale, was a pretty good replica especially at a distance.

For example, here’s a photo of the Starlyte guns which were among the first Lazer Tag gun sold by World of Wonder starting in 1986. 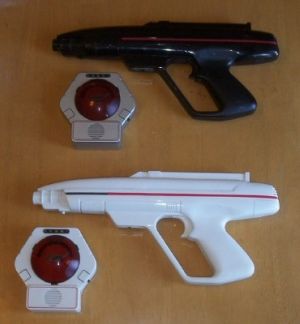 Originally this came in black. Later, it was sold in white, allegedly in response to the criticism surrounding the shooting death of Falcon