One of my favorite blogs, The Booberry Alarm Clock, reminds us that once upon a time (i.e, the 1970s) there were actually TV ads for Ball Buster, the game for the whole family! 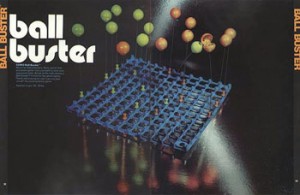 The back story on this is that this game was a product of Mego, the action figure company that at that point was at the height of its success. The fact that they chose to pour their money into “Ball Buster” shows the decision making process that led to their decline shortly thereafter (and certainly explains why the action figures were all neutered!)

For some reason Mego thought it could get away with the product’s name. When the time came to screen the game’s TV commercial to buyers from toy and game stores, the audience was stunned silent.

Shortly after “Ball Buster”, Mego made another classic well thought out decision when it rejected a licensing deal for some film called “Star Wars” (though it did later snag the “Star Trek: The Motion Picture” license!)